The organisation and its partners

Norwegian Association for Private Initative in Cambodia (NAPIC) is a non-political and non-religious association registered in Norway and Cambodia. NAPIC has also financed a local NGO for our partner Dr. Keo San, which was approved in 2008. In 2009 NAPIC signed a Memorandum of Understanding with the Cambodian Ministry of Foreign Affairs foreign, which was renewed in 2012 and 2015. Our projects have the necessary approvals for working in the health sector in Cambodia, as well as a Memorandum of Understanding with the Ministry of Education to run a school, kindergarden, education center and vocational training.

NAPIC few administrative related costs are covered by six families who contribute financially through yearly fees. We only employ Cambodians, and all costs related to travel for the Norwegian board and management are covered by themselves. Our projects have several committed sponsors whose contributions differ in size. 100% of the contributions from our sponsors go directly to our projects. For more information and recent financial statements, visit contact.

100% of received donations are allocated directly to the projects

From 2002 Irene and Dag Rømmen spent a lot of time in Cambodia. First as tourists, then as adoptive parents and through a private aid engagement in a state-run orphanage. Here, they observed a continuous addition of more children and siblings whose mother had died and were without relatives to take care of them.

Through Dr. Keo San, who assisted in the health services provided to the orphanage, they learned that birth related complication was the most common cause of death for women between 15 to 49 years old. The women often left behind children who ended up in orphanages or on the street, becoming extremely vulnerable and often taken advantage of. Dr. Keo San had for a long time wanted to do something to reduce the mortality rates of mothers and young children, but had not had the financial opportunity himself to realize this dream.

Together with their neighbours Marie-Pierre and Charles Bichet, they decided to support Dr. Keo San to set up a free maternity clinic to help reduce the maternal mortality rate and therefore the number of orphans.

In 2005 66% of Cambodian women gave birth without professional help, and there was no free birth clinic in the country. In 2010 the number had been reduced to 29% - an amazing change! 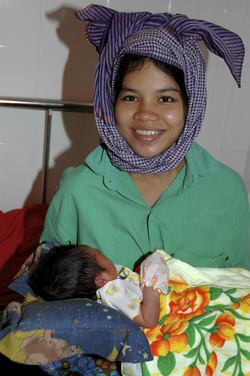 Dr. Keo San is Cambodian and has worked in France for 20 years. Dr. Keo San himself became an orphan at a young age. With support from the French Zannier Foundation Dr. Keo San has run two orphanages in Kandal, south of Phnom Penh since 1995, as well as starting an orphanage for HIV-positive children in 2004. He has also run a small private clinic, which has been extended to a larger clinic that is run in partnership with a French doctor. In addition, Dr. Keo San has been president of the organization for doctors in the Kandal-province for many years.

Mother and the newborns stay at the clinic for five days after the birth. Their stay is extended if necessary. In this period they receive nutritious meals, vitamins and vaccinations. They get information about family planning, and help and advice about breastfeeding. The child receives a health booklet with information about weight, height and what vaccines he or she has received, and the parents are encouraged to follow the government’s program for vaccination. All women are tested for HIV and receive treatment if they test positive. Read more here.

Up until august 2006 the families of Bichet and Rømmen, with some help from friends and family, supported the running of the clinic financially. Among other contributions an ambulance was donated by Per-Christian Corneliussen. In this period the clinic had about 80 births per month. From august 2006 until the end of 2009 100% of the local costs were covered by Arne Blystad. In 2010 and 2011 he continued to cover 85%, with Jasto A/S covering the rest.

From 2012 NAPIC has not had any large donors to the clinic, and has therefore been running the clinic with a somewhat reduced budget. John Hatleskog is currently the largest contributor. We have also received generous donations from Kjersti and Gunnar Thorvildsen, DOF and Dag Dvergsten.

By the end of 2015, 19.000 women has received a safe delivery of their babies, and numerous mothers and babies lives has been saved.

100% of received donations are allocated directly to the projects